This past weekend was a big milestone: we passed our initial blower door test, exceeding our airtightness target of 530 CFM @50Pa (a target based on Passive House standards as well as early energy analysis). Here’s what we learned about our air barrier. 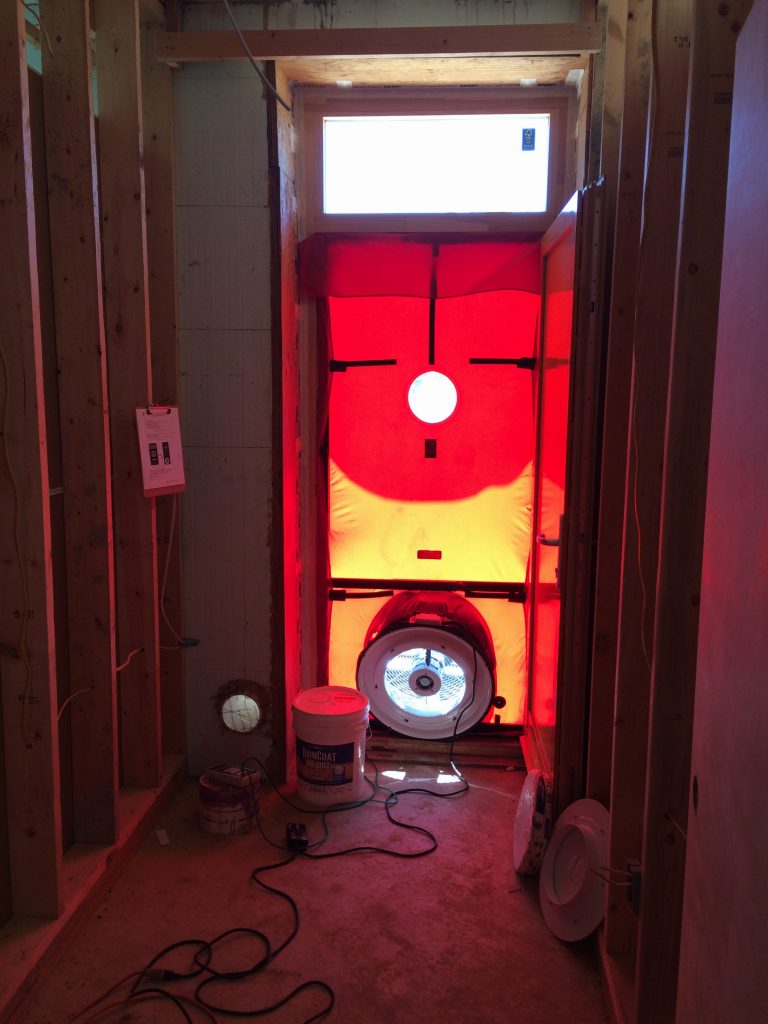 I did the test myself in my new role at Sol Design + Consulting, which provides, among other things, Passive House design, consulting, and verification services.

Our first test came in at 725 CFM. So the hunt for leaks began! With the blower on, leaks were easy to find. Here were the big culprits:

1. Rim joist & sill plate at the roof — specifically, at the transition from the ICF wall to the wood-framed roof. Air was just pouring in here—despite the air barrier on the exterior of the sheathing. We sealed (a) between the ICF and the sill plate, (b) all joints between sill plates (which were incredibly leaky), (c) the transition from the sill plate to the rim joist, and (d) the rim joist to the roof sheathing. These areas accounted for the vast majority of the air leakage. 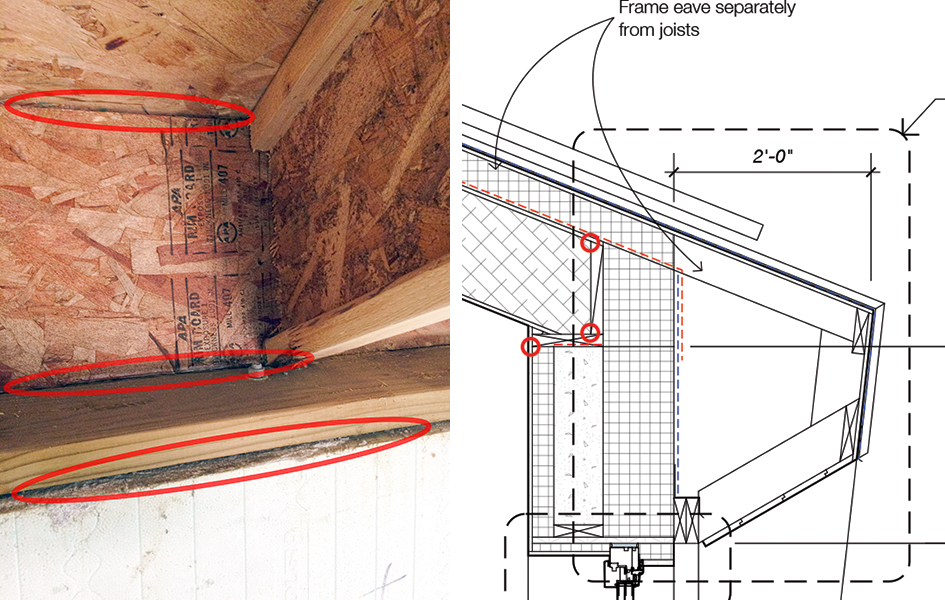 2.5. Windows. This one would’ve come as a surprise to me, except that a colleague of mine warned me in advance that Zola windows sometimes require adjustment in order to get a tight seal. (Thanks, Dave.) Fortunately our window installer, Harry Schilling, hopped on the phone to walk us through these adjustments. There was about 50 CFM coming through the windows pre-adjustment. (I count this as half because the windows are actually very air-tight once adjusted.)

Taken together, these measures yielded a 29% reduction in air leakage. Our final test came in at 515 CFM @50Pa — below our target. There are a handful of smaller leaks still to seal, so we hope to reduce this still further.

I think it’s worth noting the things that were NOT issues here.

1. ICF walls & LiteDeck roof. The walls and poured ceiling were tight as a drum — as were the transitions from slab to wall and wall to LiteDeck roof.

2. Window installation. I previously wrote about how the windows were detailed & installed, using Siga tapes for both waterproofing and air barrier. These areas, too, were totally tight.

As an architect, I’ve a tendency to bring everything back to design … but I really do think it matters when it comes to performance. In this case, the simplicity of the design and detailing made the job of air-sealing straightforward. The roof is a nice, simple rectangle, without gables or dormers or knee walls — making it relatively straightforward to seal up.

That’s not to say that Passive Houses need to be dumb boxes — but it does point to the importance of thoughtful design in making targets like air-tightness achievable. An architect who isn’t thinking about air-tightness is unlikely to achieve it by accident … and IS more likely to create conditions that are difficult (sometimes impossible) to solve after-the-fact.

I am eager to see how this buttoned-up house functions in the winter. I suspect it will be nice and cozy, with very little heating required.

Now that we have a couple months of temperature data with the air-sealing complete, we can observe a fairly clear impact. Temperatures have been more stable, with far less diurnal variation. Through most of the summer (prior to air-sealing), the upstairs was often 10 degrees F hotter than the rest of the house during daytime hours. Since air-sealing, the upstairs has been tracking roughly in-line with the (cooler) lower level.

Our early energy models indicated that air infiltration was just as important as insulation to achieving our energy goals — but it’s still remarkable to see it so clearly.

2 Replies to “Blower Door Test: Two and a Half Weak Points in Our Air Barrier”