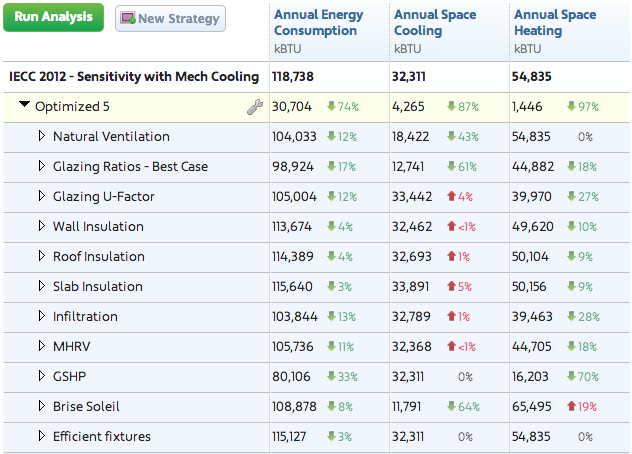 We knew we wanted a Net Zero Energy house — but was this a feasible goal? What would it take to deliver? Here’s how I investigated this question before we even had a design in hand.

My approach was to work backward: to start with a realistic site energy budget (based on a realistic solar array) and see whether a reasonable combination of energy efficiency measures could get us within this budget.

Our definition of Net Zero Energy is this: the house must generate as much energy with on-site renewable resources as it consumes annually. The house will be grid-connected, meaning that it will export excess energy back to the grid when production is high, and during times where we’re not producing enough, we can supplement with grid electricity. (This aligns with NZEB-A in NREL’s classification scheme.)

First, I investigated the site energy budget: how much energy could be produced with locally-available wind and solar resources?

Using Sefaira, I determined that the site energy budget was approximately 30,000 kBTU per year, assuming 400 sq. ft. of PV panels with 18% efficiency and optimum orientation and tilt. Solar hot water could provide an additional ~4,000 kBTU (assuming 80 sq. ft. of evacuated tube collectors), which could fulfill all or most domestic hot water needs.

Wind was not a significant resource: the site was in a low area and surrounded by trees. We discussed the possibility of locating a remote wind turbine at a higher point on the property, but decided that the on-site PV would be more practical and cost-effective.

At this point, I had already investigated the most important passive design strategies for this house using a “simple box model” that approximated the house’s square footage and glazing characteristics without over-specifying the design. (You can see those here.)

In addition, I studied the model’s baseline energy use, assuming “code minimum” construction. The building was heating dominated (not surprising for Iowa, which is considered a cold climate); but cooling was the second largest energy use. Heating was driven first by conduction losses (poor insulation) and second by infiltration (air leakage). Cooling was driven overwhelmingly by solar gains. Total energy use was ~120,000 kBTU per year — four times my estimated energy budget!

The question was: Could I find a combination of passive design strategies and energy efficiency measures that could reduce energy use 75% from the baseline to keep us within the energy budget? Once again, I used Sefaira Architecture for this investigation, which made the process of investigating combinations quite fast.

For example, I investigated a “passive solar” bundle that included a highly-insulated envelope (including windows), optimum shading on the south, and exposed thermal mass floors. This was a good start, but not nearly enough. So I began to add other strategies: air tightness, heat recovery ventilation, efficient lighting and appliances, etc.

All of the Above

My conclusion: It would be possible to stay within the energy budget, but it would take an “all of the above” strategy, including the following:

In essence, we were going to design a super-insulated passive solar home.

The next questions were:

How did all of these analyses inform my thinking about the design? A few observations: