Before I ever put pen to paper for this project, I wanted to answer a deceptively simple question: What passive design measures are most important? What basic strategies did the design need to employ to be successful? —to maintain human comfort with a minimum of added energy?

It’s important to answer this question before design begins in earnest for two reasons:

In addition, I was interested in an ongoing debate within the design community. There’s a sense that “superinsulated & airtight” has supplanted “mass & glass” as the preferred design approach for passive, low-energy homes. (Lloyd Alter’s blog provides a good overview of the current sentiment.) But I wanted real data, not rules of thumb — and to be honest, part of me prefers the poetry of sunlight to the precision of rigid foam. So I was eager to test this notion for myself.

Based on climate data (typical temperatures, humidity, cloud cover, and the like) and a number of assumptions about building operation, Climate Consultant will estimate the percentage of annual hours that will be comfortable using various design strategies. 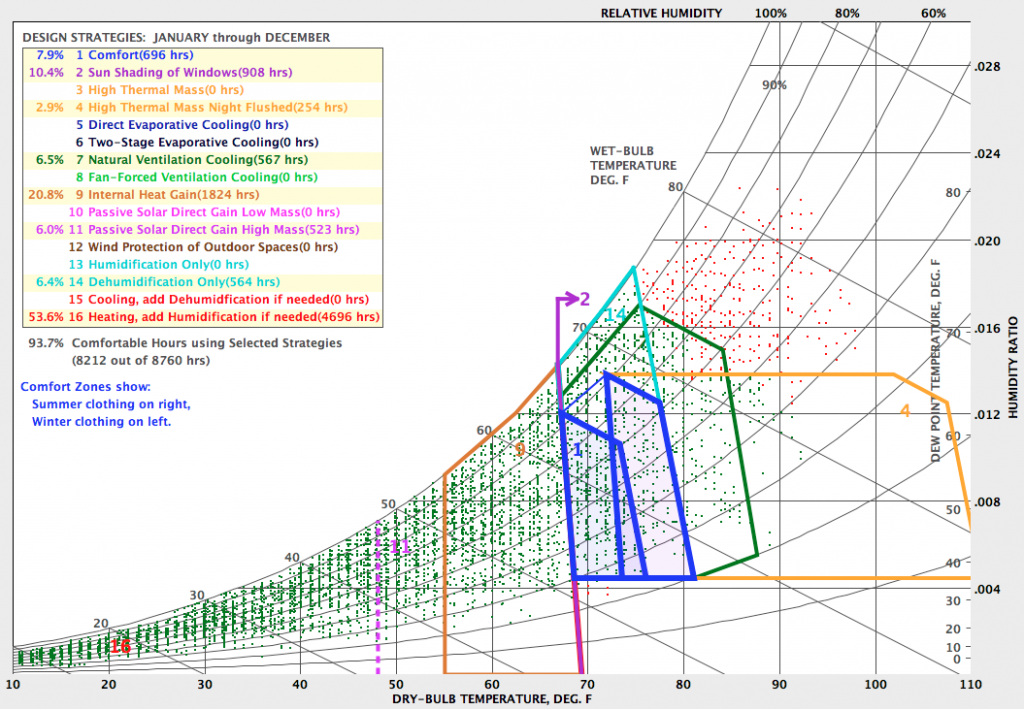 In this case, the top strategies were (in priority order):

Here’s how these strategies might map to design responses:

The downside of this approach is that the best design strategies depend not only on the climate, but also on the building design and operation — and so this analysis risks missing form-related strategies like building shape, orientation, and glazing amounts. So I augmented these findings with a quick “simple box” energy model.

In the pre-design phase, energy modeling software can be a very useful tool for exploring the consequence of different approaches. 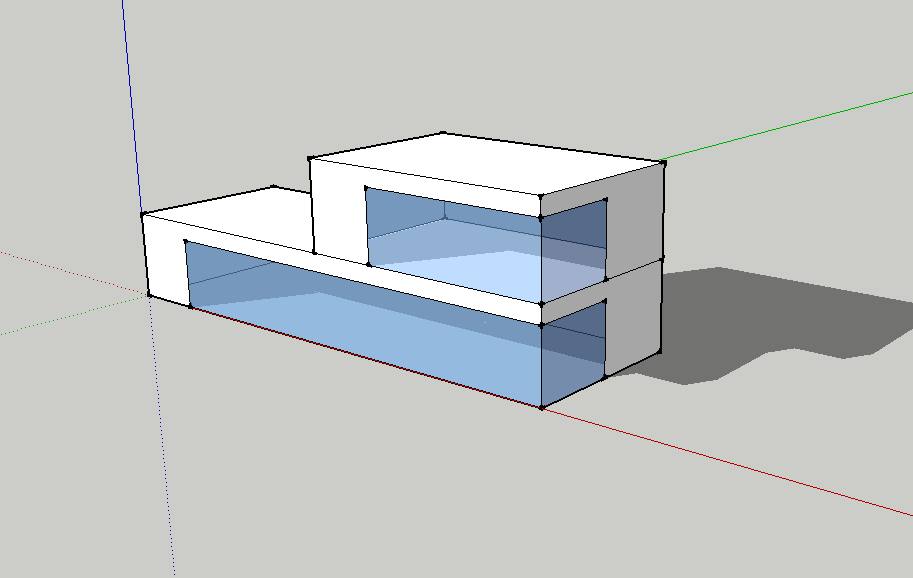 I created a simple box model based on a number of things we already knew about the design:

I then ran sensitivity studies for a number of properties. For each parameter (for instance, wall insulation) I found the “maximum” and “minimum” annual energy use we could achieve by varying that single parameter. In many cases, the maximum (worst case) was defined by the energy code (i.e. we couldn’t go below R-13 for the walls). The minimum (best case) was determined by a combination of analysis and common sense — either by finding the optimum using a parametric analysis feature called Response Curves, or capping the value with what’s technically feasible to construct. For instance, the realistic upper bound for wall R-values is R-60 — beyond this, the wall would be ridiculously thick. (It turned out that improving wall insulation had diminishing returns anyway, so going beyond R-60 offered very little additional improvement.) (For step-by-step detail, see my post on Sensitivity Analysis.) 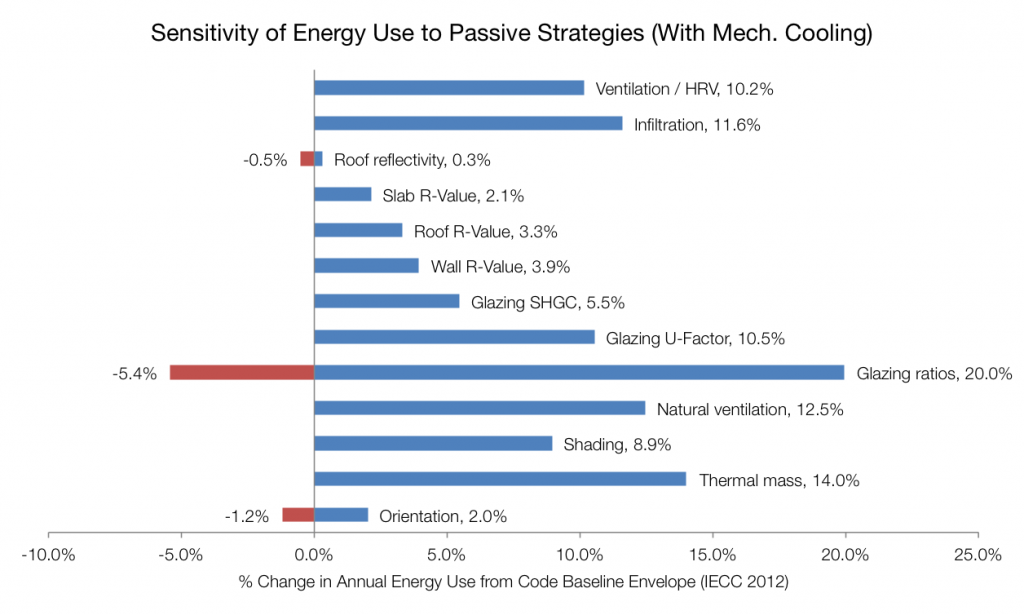 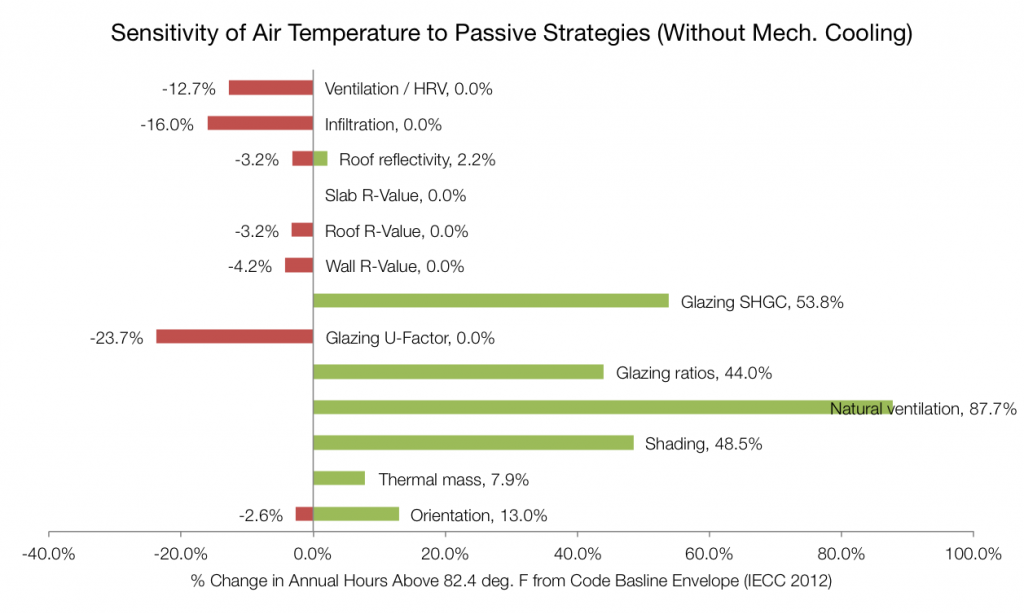 My takeaway was that the most important strategies were:

The added insight here was the critical importance of glazing amount, properties, and shading. We were going to have to invest in great windows — and so I needed to use them with great care so that each window provided multiple benefits: views, good wintertime solar gain, and daylight.

The analysis also re-affirmed the importance of shading — and specifically showed that it was more effective than adjusting the solar heat gain properties of the glass. Well-designed shading blocks summer sun but lets winter sun in, whereas glass with a low SHGC blocks all solar gain, both good and bad.

Finally, we layered a rough cost estimate on top of these strategies. Some of them are free or even cost-negative: orientation has only a 2% impact on energy use, but that’s 2% we can get at zero cost. Natural ventilation is also free: just a matter of layout and careful placement of operable windows. Thermal mass is pretty cheap, but could reduce energy use by 14%. These strategies are clear winners and easy to integrate early in design.

So where did this analysis put me in the “mass & glass” vs “superinsulated” debate? On both sides. The results pointed toward a synthetic approach: a well-insulated, passive solar design.

Put glazing on the south to capture winter sunlight (enough but not too much); make sure the sunlight hits exposed thermal mass, which can store this warmth overnight; specify well-insulated, air-tight windows, walls, and roofs so the heat doesn’t escape; design shading to block summer sun; allow the house to open up when the weather permits, and especially on cool nights in the summer and early fall; embed the house in the earth to take advantage of its stable temperatures.

From this, a picture began to emerge of the house: snug, bathed in sunlight in the winter; shaded, breezy and cool to the touch in the summer.

Some things I’ll do differently next time:

4 Replies to “What Passive Strategies are Most Important? Using Simple Box Modeling to Inform Design”