Once we evaluated which passive design strategies were most important when it came to energy use and thermal comfort, we asked the question: which will give us the most bang for our buck? Rather than engage in a detailed (time-consuming) cost analysis at this early stage, we did a simple overlay on our existing sensitivity analysis — which provided some key insight for remarkably little effort.

Essentially, we took our existing sensitivity graph, showing how much impact each passive measure could potentially have, and assigned each a rough cost magnitude, from one dollar sign ($) to three ($$$) to indicate whether it was inexpensive, expensive, or somewhere in the middle.

What resulted is the following graph. 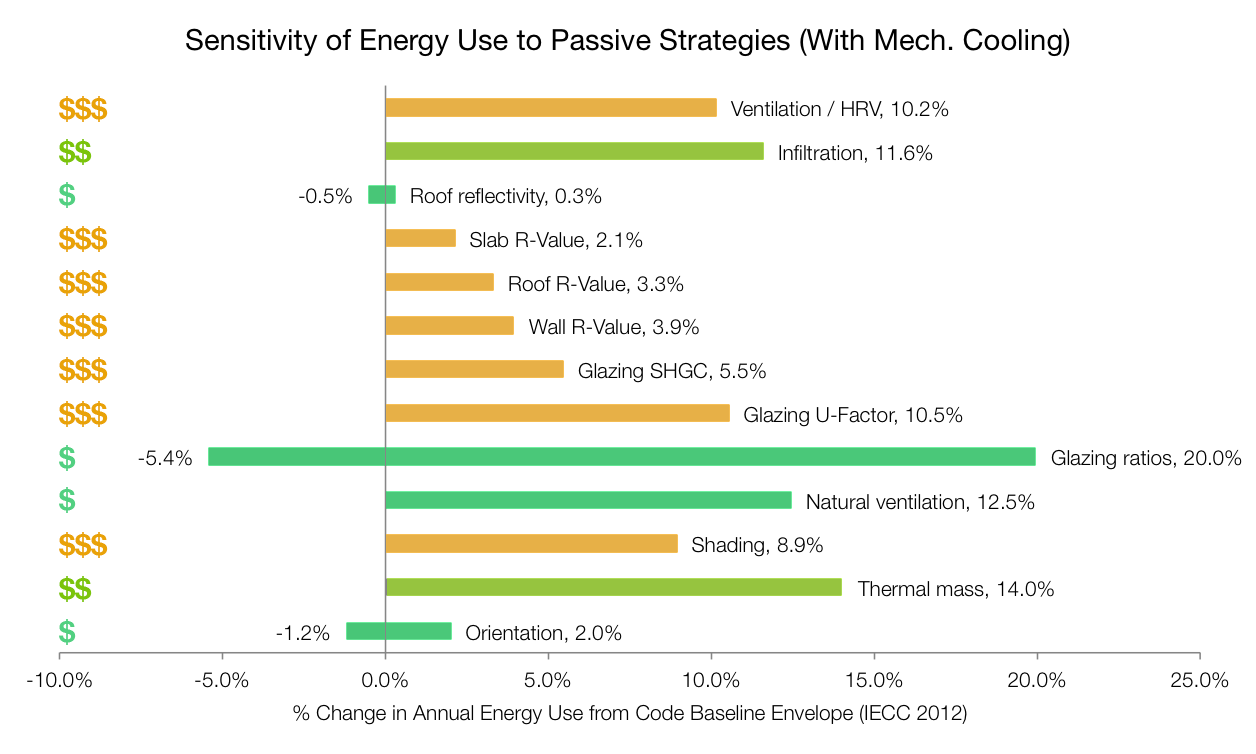 While simple in both concept and execution, it nonetheless shaped our thinking. Some of the strategies were free, or even cost negative:

The potential combined impact of these strategies together is 60%–that is, up to a 60% reduction in energy use compared to a conventional new home (built to the already-rigorous IECC 2012 standards). Of course, impacts like these are not purely additive–a whole-building energy model is needed to understand interactions–and we’re unlikely to maximize each variable. But, the 60% number is still useful as an indicator of the order-of-magnitude impacts we can achieve simply through low- or no-cost strategies.

One item was missing from this evaluation, and that is earth berming. If it had been included in the sensitivity study, it would likely have had a significant impact: up there with glazing ratios. Its cost? If you’re already assuming that the home has a basement, the cost is probably marginal–a bit more below-grade wall. (A green roof, however, is another story.) Part of the reason it wasn’t included here was that it was already a design requirement: the clients wanted an underground home, and we’d selected a site with that in mind.

How did this effect the design? As I discussed in my previous post, it points the way toward a passive design approach: a tight, earth-bermed home with good passive solar orientation and enough thermal mass to capture the sun’s warmth.

While other strategies will ultimately be needed as well, this early insight allows us to prioritize the most cost-effective, and incorporate them into the design’s DNA in a way that just wouldn’t be possible later. That’s precisely the magic of a performance-based approach.