Here’s a full cost breakdown, and the seven strategies we used to get there.

Our goal was to match typical per-square-foot costs for a typical custom home of the same size in the same location. The target we arrived at was $160/s.f. (These were typical costs in 2014-15 when the project began. Construction costs have risen since then.)

The cost comparison does NOT include site-related elements like driveways and utility connections, as these are assumed to be the same between the baseline case and design case.

There are a couple complications. One is the contractor fee. The owner opted to serve as the general contractor, thereby avoiding the usual ~20% fee. On one hand this was an important cost-saving strategy. On the other hand, it’s not necessarily a replicable strategy for most homeowners. To make this comparison as clear and fair as possible, I’ve separated out the contractor markup so we can look at the numbers both ways.

The other complication is closely related: the owners did a significant portion of the construction work themselves, including assisting on the ICF build and doing much of the interior framing, among other items. The solution here was to value their labor at standard rates for the purposes of this cost analysis.

How Did We Do?

Top line: If you exclude the PV system (not yet installed), and take credit for the savings from self-building, the home is 8% cheaper than a conventional custom home of similar square footage. That’s including special features like the green roof and corner lift-slide doors, which added significantly to the cost without necessarily adding to the home’s performance. 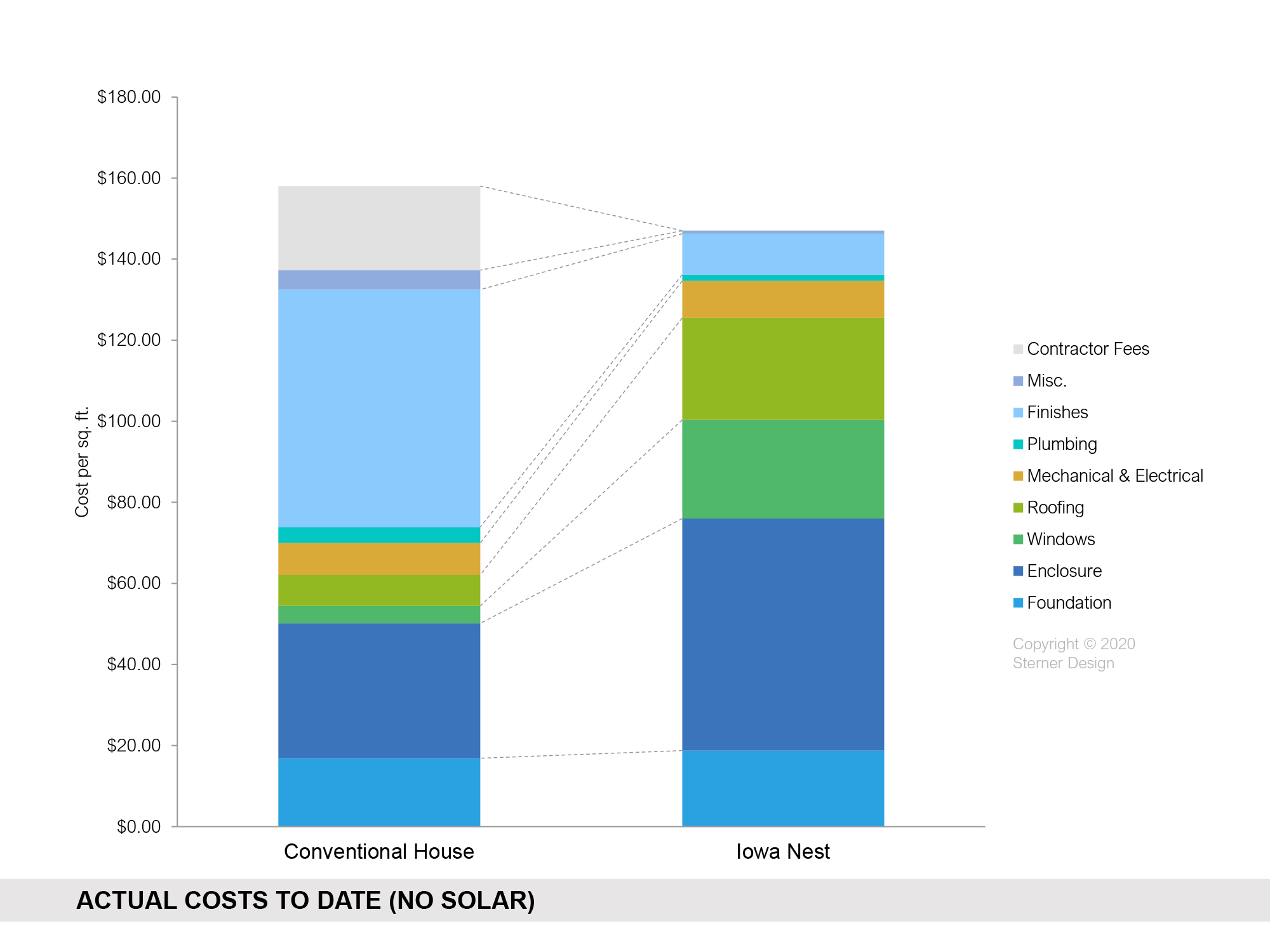 If you include the PV system (required to ultimately be Net Zero), we’ll be approximately at cost parity (2% less than convention based on one solar bid).

Here are a couple other ways to look at the numbers: 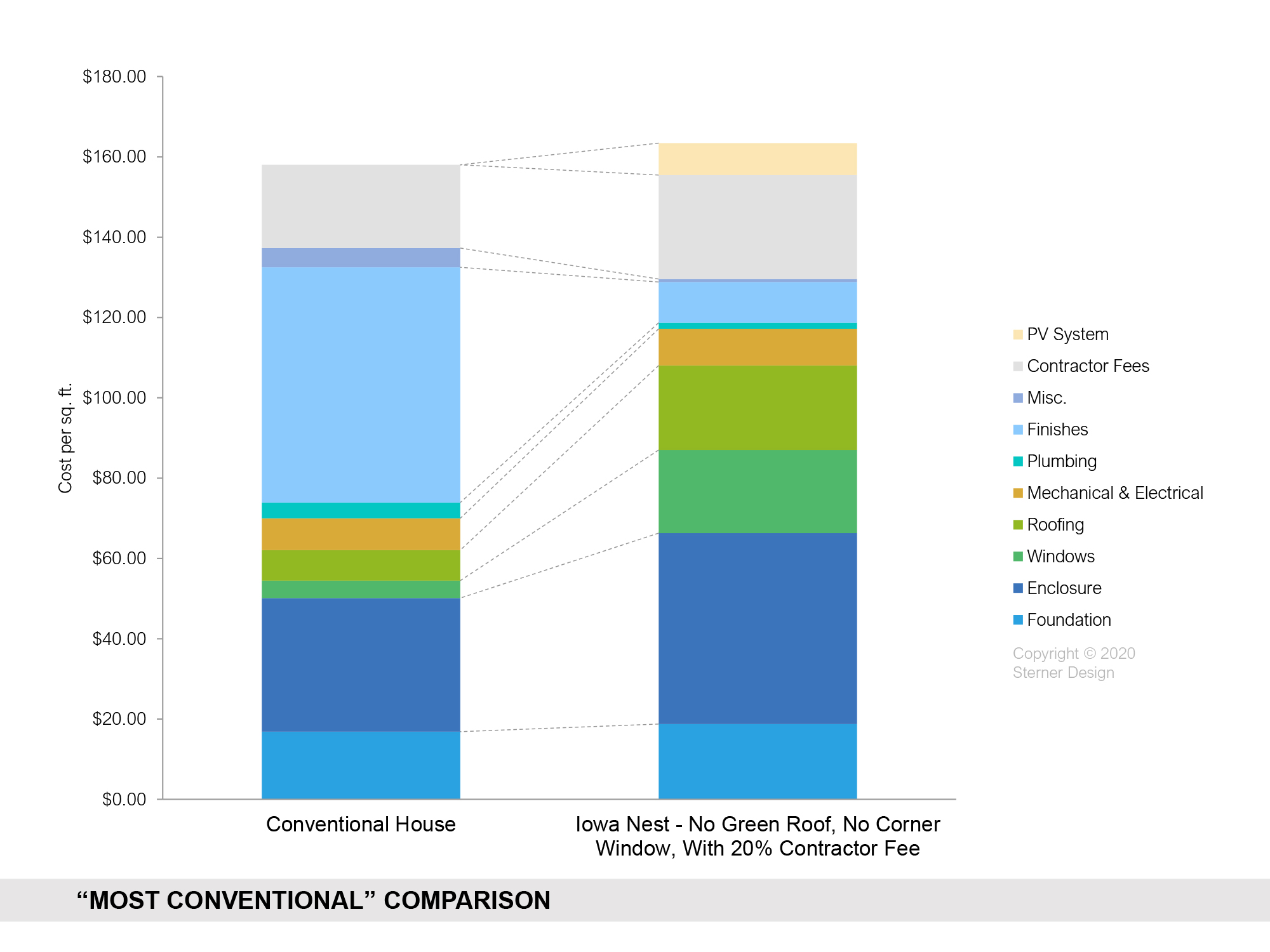 This is big. This means that it’s possible to have a beautiful, modern, super-efficient, Net Zero Energy house, with little to no added capital cost.

How Did We Do It? Seven Strategies

Here are seven key things we did to keep costs down. 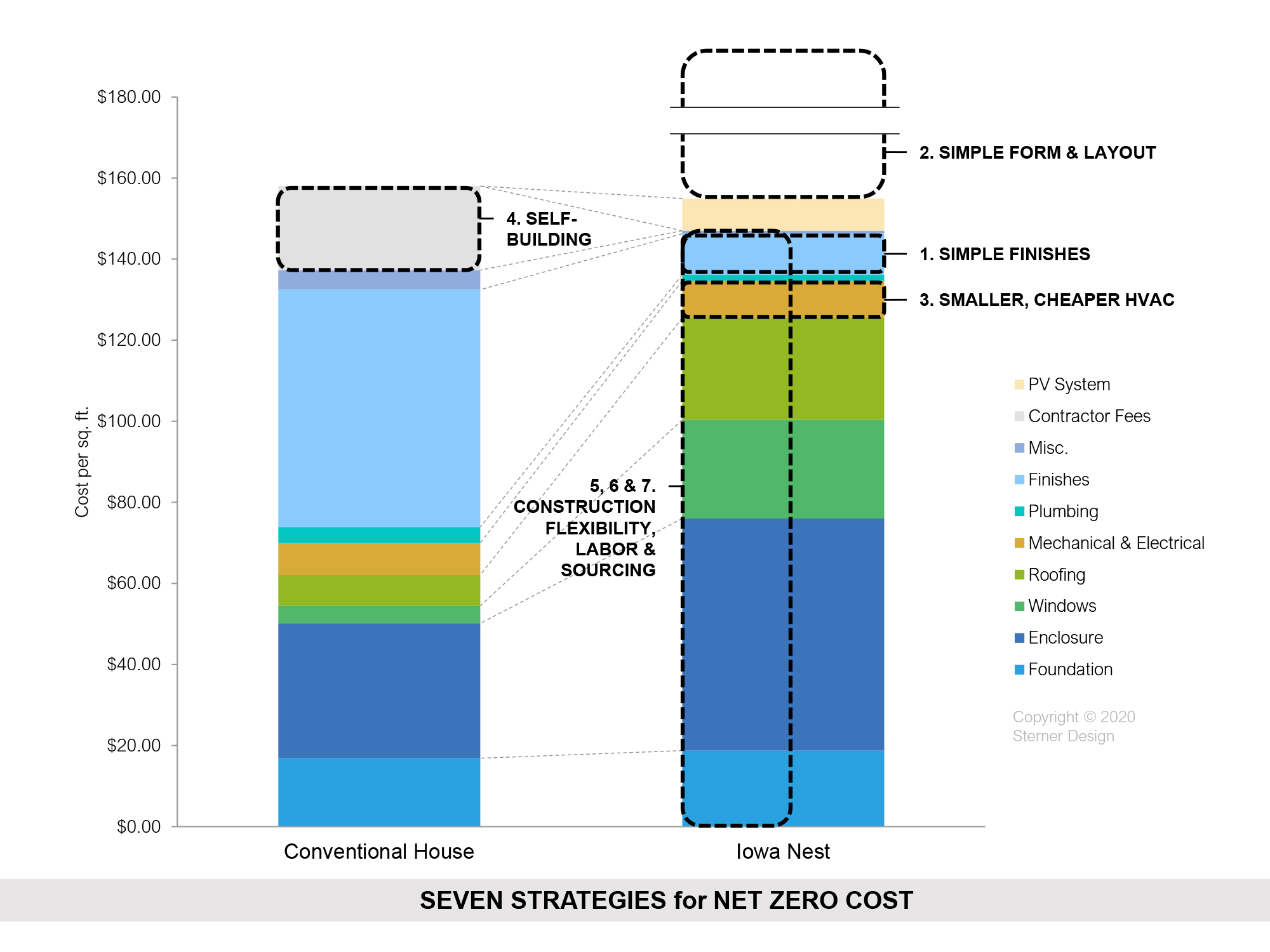 Interior finishes are almost 30% of a conventional construction budget. Of this, about a quarter is interior (non-structural) framing and drywall, a quarter is the kitchen, 15% is flooring, and 15% are bathrooms. One of the big stories of this house is that we traded expensive interior finishes for a high-performance envelope. That doesn’t mean that the interior is cheap or low-quality. Instead, we:

The result is a clean, contemporary, comfortable interior at a fraction of the price of a conventional home.

One absolutely essential strategy that’s not immediately apparent from the graphs is the efficiency and compactness of the design. These “avoided costs,” if unchecked, can easily blow up a budget. In fact, I learned this the hard way: my first schematic design for this project was almost 2x over-budget. This was almost entirely due to geometric complexity and a meandering floorplan. 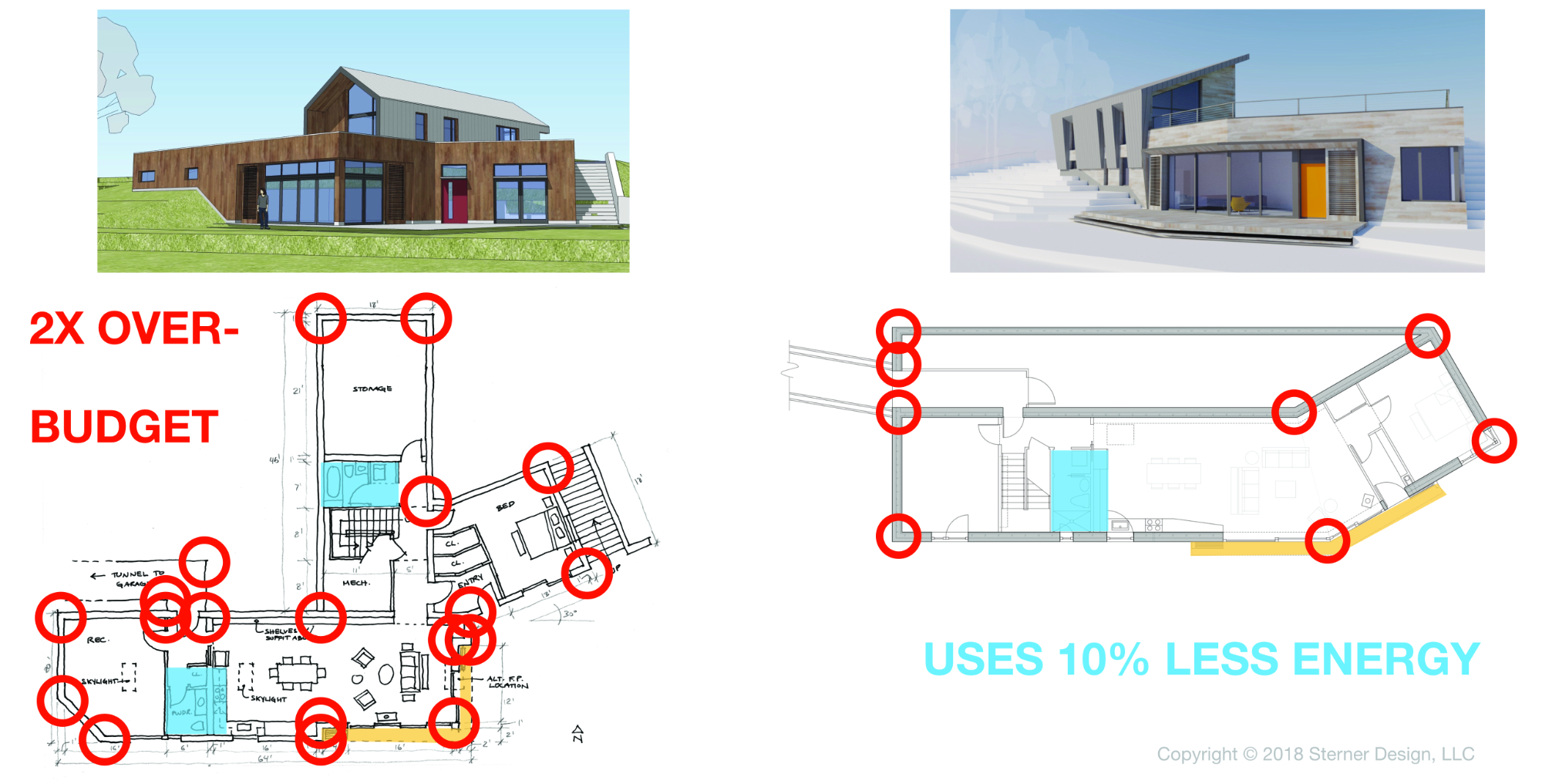 The re-design shrunk square footage slightly and dramatically simplified the design. I also switched the shading elements from being “carved into” the volumes to being “applied” on the exterior, and aligned all the plumbing in a single wet wall (which is why the “design case” plumbing is actually cheaper than the baseline). Not only did these changes bring the budget in-line, but they decreased energy use by 10% — so performance got better as costs went down.

On high-performance homes, complexity has a double impact on cost. The more surface area and corners you have, the more energy you lose through the envelope, and the more insulation you need to compensate. So there’s the direct cost of complexity in labor and materials, plus the added cost of more insulation, better windows, and/or bigger HVAC systems.

The big lesson here is that you can’t just “add on” Net Zero or Passive House strategies after-the-fact, unless you’re willing to throw a lot of money at it — and even then, there is higher risk of moisture or comfort problems. Trying to work around bad design moves will inevitably lead to higher costs, poor performance, or both. If budget is an issue, performance must be designed in from Day 1.

The HVAC budget for this house is actually smaller than our conventional baseline. This is because (1) we entirely eliminated the need for air conditioning, (2) we entirely eliminated the need for ductwork (except for 3” flexible tubes for the ventilation system), and (3) we specified an inexpensive heating system (electric radiant heat). Normally electric radiant is a terrible fit for a low-energy home — it’s not particularly efficient. But this home has such a small heating load that the additional energy consumed is marginal.

I originally anticipated that this project would use a Ground Source Heat Pump (GSHP) with a hydronic radiant floor. GSHP are very efficient, but expensive. Our first clue that this solution wasn’t ideal was when a local rep told us that he didn’t have a system small enough for this house. The mechanical engineer suggested electric radiant heat (still embedded in the floor), which was about half the cost of the GSHP system. This solution will require additional PV capacity to offset a small increase in energy use — but we still come out well ahead cost-wise. 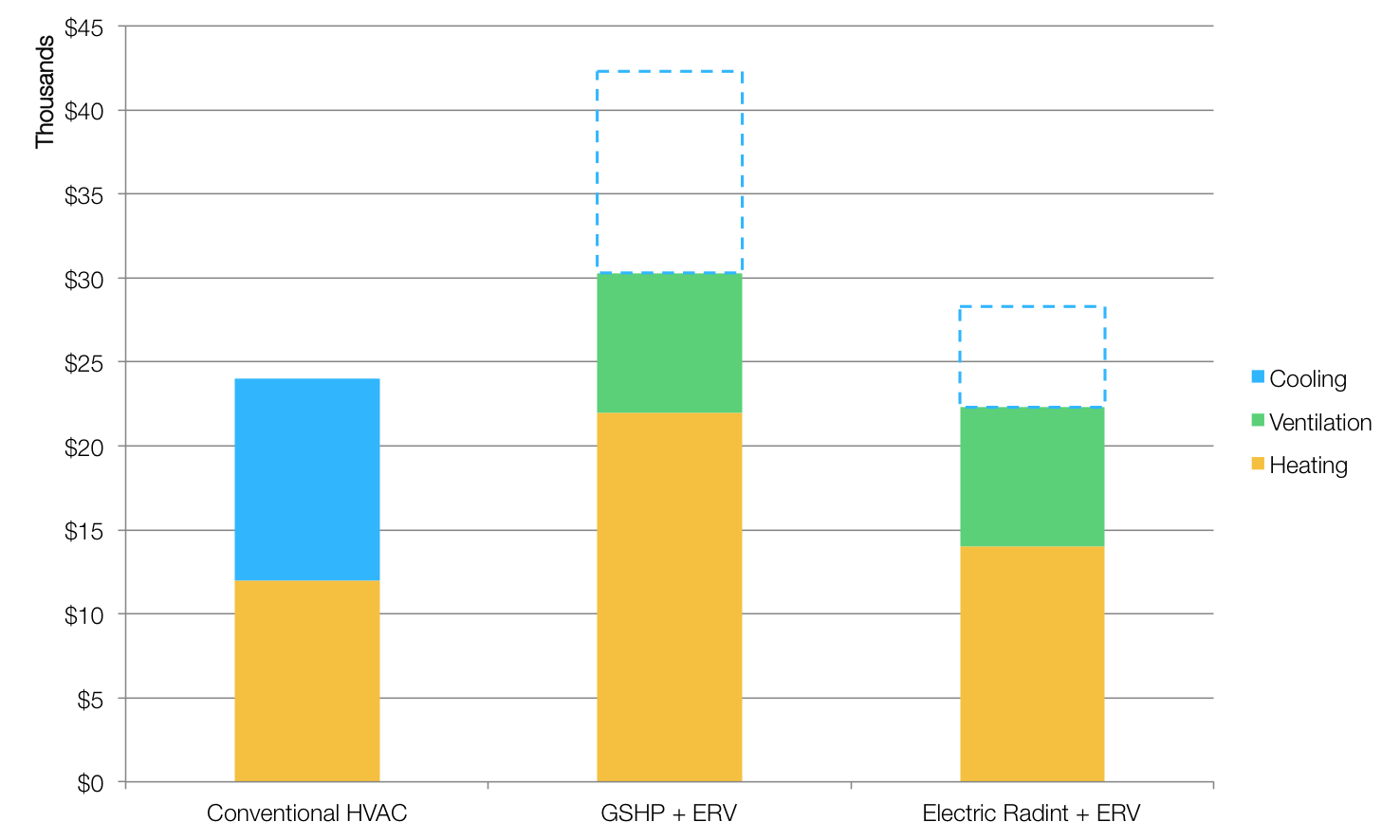 In addition, the house has no active cooling system. By using good passive design, verified through extensive thermal comfort analysis, we found we could maintain comfort for an expected 96% of hours annually.

The project does include a super-efficient Zehnder ComfoAir 350 ERV for ventilation. While this is a significant added cost, we still came out under our baseline costs because of the avoided cooling and ductwork.

The lesson is that an integrated design team willing to look at things holistically can make smart trade-offs between the envelope, mechanical systems, and renewable energy, which can lead to big savings. The right combination can allow you to “tunnel through the cost barrier” (Amory Lovins’s words) and achieve higher performance at lower costs.

The homeowners served as their own General Contractor for the project — a strategy that avoided the ~20% of a conventional budget that covers the contractor’s overhead and profit.

Let me be clear: this approach is not for everyone. In fact, it’s probably not right for most homeowners. Building a house is a significant undertaking that requires time and expertise; and for most homeowners, hiring a qualified, experienced contractor is well worth the money — particularly for a super-efficient house, where expertise is even more important. In addition to expertise, the GC typically carries general and liability  insurance and warranties the work, so if anything goes wrong, it’s not the homeowner who’s on the hook.

In this case, one of the owners had an engineering background, experience in the construction industry, and a history of managing complex projects. We also used a construction system (Insulated Concrete Forms) that was more amenable to self-building, and could achieve the design requirements for continuous insulation and air tightness without requiring as much specialized expertise.

It’s also important to note that the owners still hired qualified subcontractors where needed. They worked with a local ICF contractor, Jon Ide, on the ICF installation. They hired Harry Schilling, an expert in Passive House windows, to lead the window install. Both Jon and Harry were open to having the owners assist to keep costs contained. Zehnder provided installation and commissioning of the ERV system. So even with a self-build, it’s important to know where NOT to cut — where specialized expertise is still critical.

Passive House assemblies, with high insulation and high air-tightness, are often more difficult to construct, require more time and labor, require specialized expertise (for which you pay a premium), and use non-standard (read: expensive) products. Paying close attention to constructibility can yield big savings, particularly when it comes to labor, which accounts for half of the cost of a typical house.

Here, we utilized ICF for walls and LiteDeck for roofs. These products made a lot of sense given the earth bermed design and green roof. But they also came with huge labor savings. First, ICFs can be easily assembled by a small crew — in our case, a team of two assembled the entire structure. Second, the ICF serves three functions: it is the structure, the insulation, and a high-quality air barrier. Instead of having three different trades on site at three different times, our 2-person crew installed all three in one pass. It’s also incredibly effective as an air barrier and continuous thermal envelope — meaning it requires less specialized expertise, and is less likely to fail inspections or tests, and less likely to require rework. (Our blower door test bore this out: the weakest part of the envelope was the one wood assembly in the project.)

The build time on this project was long — over two years. This was an intentional strategy on the part of the owners, who were willing to trade time for cost. The flexibility on schedule allowed them to negotiate better prices with subcontractors, by allowing subs to come to the site when their schedules were slow. A similar trade-off was made on the ICF portion of the build: the small crew kept labor costs low, but extended the timeline compared to a “standard” build with a larger crew.

This is perhaps the most straightforward item on this list, but still essential: cost-effective sourcing. There were a few parts to this:

Conversely, it’s also important to know where NOT to cut costs. We invested in a top-of-the-line efficient ERV and very high-performance windows, both essential from a performance standpoint.

A few “notes to self” for future projects:

The clients and I set out to show that a Net Zero, beautiful, contemporary home could be built on a conventional budget. While the specifics of this house and its construction make a comparison to a “conventional home” difficult, the experience leaves me more confident, not less, that near-net-zero cost is achievable today for Net Zero homes.